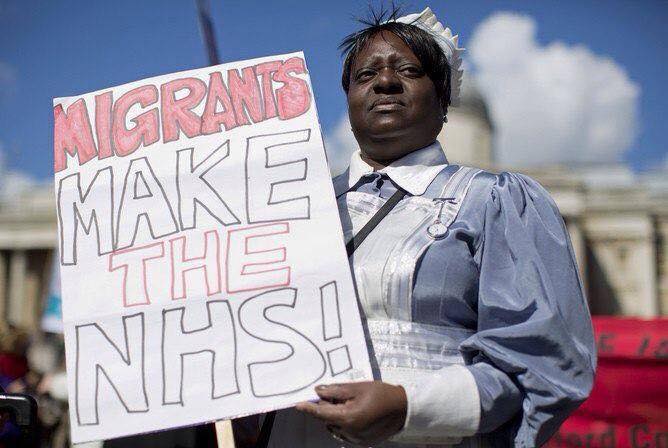 The government has announced that is will be doubling the NHS surcharge paid by migrants to £400 per year.

It is hoped that the increase will raise an additional £220 million pounds a year for the National Health Service.

The announcement comes days after thousands of people attended demonstrations demanding more funding for the NHS.

If that was not a clear enough signal that the government blamed the NHS crisis on migrants, the statement by the Health Minister James O’Shaughnessy was as blatant as it gets.

“Our NHS is always there when you need it, paid for by British taxpayers.

We welcome long-term migrants using the NHS, but it is only right that they make a fair contribution to its long-term sustainability.”

The NHS is paid for by all taxpayers in the UK, British and foreign nationals alike.

In fact, foreign nationals working in the UK (who are not settled here) pay twice, first through the surcharge and then through taxation.

Let us also not forget that many NHS workers are foreign nationals and it would simply collapse without their presence.

The NHS surcharge was introduced by the government in 2015 for temporary migrants such as workers, students and those seeking to remain in the UK on account of their family or private life.

Once paid, the individual is exempt from paying medical charges normally paid by temporary visitors to the UK.

The fee for 2.5 years is payable at the time of making the immigration application and will now cost £1000 per person.

It is paid in addition to the immigration application itself which is £991 per person.

A family of five applying for leave to remain will now have to pay almost £5000 in application fees plus an additional £5000 in NHS surcharge.

That amounts to £10,000 for leave to remain for 30 months, after which an extension application will need to be made.

This is likely to cost even more than £10,000 as application fees increase almost every year.

This essentially means that an average migrant family will need to save £4000 a year just to be able to extend their visas.

This does not take into account any legal fees they may need to pay if they are unable to navigate the increasingly complex immigration rules on their own.

This is far beyond the reach of the average family in Britain today.

Anyone seeking to apply for leave to remain is advised to do so as soon as possible while it remains somewhat affordable.